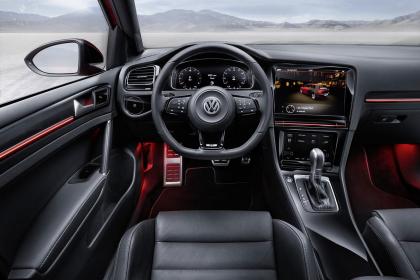 VWâ€™s head of powertrain development, Dr. Heinz-Jakob NeuÃŸer, has confirmed that the facelifted Volkswagen Golf will feature gesture control technology when it arrives at the end of 2016. This is a first for the family hatchback segment and part of a growing trend for advanced connectivity and control technology making its way into more affordable cars.

NeuÃŸer confirmed the news at CES in Shanghai, where the German manufacturer also rolled out its VW Golf R Touch concept. The gesture control technology that will be used on the facelifted Golf will be borrowed from the concept.

â€œThe interior features a preview of future VW interior technologies, with smartphone applications redefined for automotive use,â€ NeuÃŸer told Auto Express. â€œThe gesture control will become reality in the Golf at the end of next year.â€

The new infotainment and gesture control system which will make its way into the Golf is likely to be made up of three digital displays and 5 in-car sensors. A larger 13-inch hi-res colour display will replace the conventional screen housed in the dash of the current Golf. A smaller 8-inch screen will replace the traditional instrument cluster, with gesture control being used to operate the volume settings, temperature controls and sunroof operation instead of traditional controls.

The cabin will become largely â€œbutton-lessâ€, with the functions not able to be operated via gesture control being accessed on the new digital displays which will feature haptic feedback.