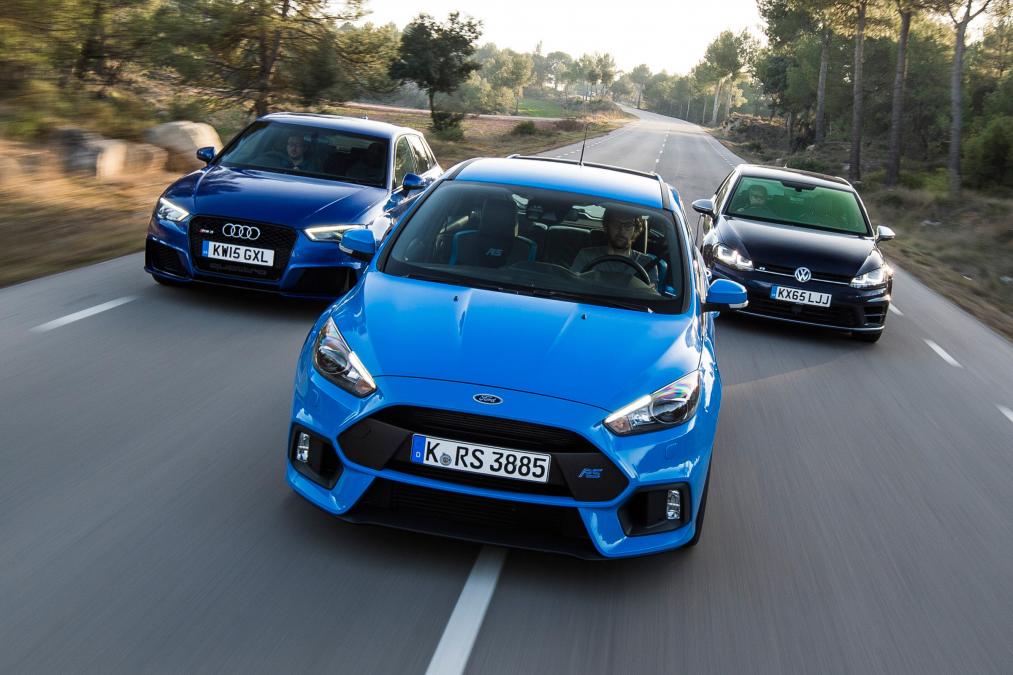 There are two letters guaranteed to get fast Ford fans excited: RS. They stand for Rallye Sport, and after the famous badge debuted on 1970â€™s Escort RS1600, it has been reserved for the hottest Fords ever since.

The latest addition to the family is the new Focus RS. This go-faster family hatchback is the most powerful ever, thanks to a thumping 345bhp turbocharged 2.3-litre engine. Itâ€™s also the first RS since the rally-bred Escort RS Cosworth to feature a four-wheel-drive system, although this trick transmission has been designed to boost driver fun, not just to improve grip and traction.

Yet despite the incredible power and hi-tech hardware, the new Focus RS hasnâ€™t forgotten its blue-collar roots. With a price thatâ€™s a whisker under Â£30,000, it promises plenty of performance per pound.

Here, it faces two fierce rivals. The Audi RS3 was used as a benchmark by Fordâ€™s engineers when developing the Focus, and its 362bhp looks good on paper. It also has plenty of upmarket appeal, albeit with a price to match.

The Volkswagen Golf R doesnâ€™t shout nearly as loudly as its rivals here, plus itâ€™s a little down on outright power. However, itâ€™s competitively priced and is recognised as the handling benchmark for four-wheel-drive hot hatches. Until this point, at least.

So which of our heavy-hitting pocket rockets will land the knock-out punch? We hit the tortuous mountain roads above Barcelona in Spain to find out.

The Ford and VW borrow their engines from other models. So the 2.3-litre in the Focus is also used in the Mustang, but tweaks to the internals and turbo boost power to 345bhp. Under the Golfâ€™s bonnet is a GTI engine, with power increased from 217bhp to 296bhp.

The Audiâ€™s engine appeared in the old-shape TT RS, and also features in the RS Q3 crossover.

Ford has toned down the Focusâ€™s styling in an attempt to rival the premium brands, but there are still plenty of RS cues, including the gaping grille and large tailgate spoiler. The Audiâ€™s potential is equally obvious, but its additions arenâ€™t as aggressive. By comparison, the Volkswagen is low key and could be confused with a cheaper R-Line model.

The Golf comes with a choice of either a six-speed manual gearbox or a Â£1,415 twin-clutch DSG automatic. All RS3s feature Audiâ€™s seven-speed twin-clutch S tronic, while the Focus is only offered with a six-speed manual â€“ although Ford hasnâ€™t ruled out introducing its PowerShift auto box to the RS at a later date.

With its eye-catching price tag and blistering performance, the Focus RS is a fast Ford in the finest tradition. Yet itâ€™s the carâ€™s trick four-wheel-drive system and honed suspension that star, giving the Focus incredible agility and delivering more than enough driver involvement. It also looks and sounds the part. The only black marks are reserved for the small boot and firm low-speed ride.

The Golf misses out by the narrowest of margins in this encounter. Itâ€™s faster than its power deficit would suggest and it attacks twisting back roads with incredible composure. Itâ€™s also the easiest car to live with day to day and has the most versatile interior. Yet it just lacks the excitement and involvement of the Focus â€“ and in this class, that counts for a lot.

If this test was based purely on engine sound and straight-line performance, then the Audi RS3 would carry off the spoils. It also benefits from having easily the best cabin here and comes with most standard equipment. However, its handling feels a little lead-footed in this company, and thereâ€™s no getting away from that hefty price tag.