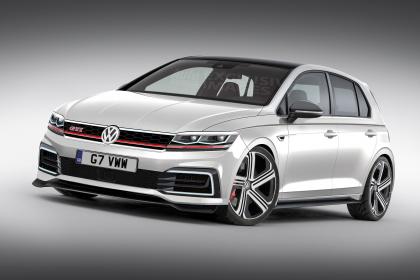 Each and every Volkswagen Golf to date has been flanked by a hot GTI version, with the current car pumping out as much as 286bhp in flagship Clubsport form. The Mk8 will be no different, and the GTI is likely to feature a new 2.0 TSI engine with as much as 325bhp.

The new hot Golf, which is due shortly after the standard car, in 2019, will get a significant power hike, with even the entry-level model producing in the region of 260bhp. There will be a more powerful Performance Pack car with 300bhp, as well as an evolution of the Clubsport version with 325bhp.

Our exclusive images reveal how the GTI could look, although itâ€™s likely to be subject to subtle changes given the new details portrayed in our pictures. Yet expect all the usual sporty styling cues â€“ like the beefed-up bumpers and red detailing, along with the trademark tartan seats.

This being a GTI, all versions will be front-wheel drive, and with a choice of six-speed manual or DSG auto boxes. However, the DSG wonâ€™t be a rehash of the old six or seven-speed units, but the worldâ€™s first 10-speed twin-clutch set-up.

Itâ€™s a similar size and weight as the current seven-speed DSG, and designed to work with the Golfâ€™s MQB architecture, and is being engineered not only for snappy shifts and a sporty feel, but to cut fuel consumption significantly. Capable of handling up to 550Nm of torque, itâ€™s set to be used in the Mk8 Golf GTI, Golf GTD and Golf R; lesser models will make do with the more cost-effective seven-speeder.

VW has been dropping hints about the look of future sporty Golfs, and the common thread is more aggression, while retaining classic GTI cues. In 2013, the Golf Design Vision GTI Concept wowed the WÃ¶rthersee tuning show in Austria with its bigger wheels, sculpted body and sharp, exaggerated nose.

Then, at the same event in 2014, the brand unleashed the 395bhp plug-in hybrid Golf GTE Sport concept, which continued the angrier design theme and applied it to an even lower-slung coupÃ© body shape with bonkers gullwing doors. Our images show how the new GTI will take the Mk8 Golfâ€™s conservative silhouette and pump it up with a deeper front bumper housing C-shaped LED running lights, lower side sills and a rear diffuser with a pair of Coke can-sized tailpipes. The trademark red pinstripe runs the width of the grille and into slimmer LED headlamps, underscoring the red GTI badge.

And we may not have to wait long before VW shows its cards. Rumours abound that it will present a new concept at Januaryâ€™s Consumer Electronics Show in Las Vegas. This technology demonstrator, possibly with a full electric powertrain, could also give a big clue towards the styling of the Golf Mk8

So the various versions of the new GTI will look sharper, be faster and use far less fuel â€“ and thatâ€™s not entirely down to the more powerful engines. VW is expected to use innovative new steel-polymer sandwich tech for selected body panels, cutting weight for those components by as much as 30 per cent. By sticking thin sheets of steel either side of a polymer core, the weight of the Golfâ€™s bonnet, for example, can be reduced by 2kg or so. Carbon fibre is still much lighter and more rigid, of course, but costs much more.

With the GTI family covering so much more of the hot hatch market than before, the big question is where this leaves the even hotter and traditionally four-wheel-drive Golf R. The word from Wolfsburg is that there are several options, all explored in recent concept cars.

The most obvious option, and current front runner, is to use a version of the highly strung 395bhp 2.0 TSI engine from 2014â€™s R400 concept, with four-wheel drive and a 10-speed DSG box. An R400 version (spotted below) of the current Golf is expected to go on sale in 2016, so the next Golf R could take things even further, extracting around 420bhp from the turbocharged four-cylinder.

Other alternatives include fitting the new twin-turbo 3.0-litre VR6 engine, showcased in 496bhp form in 2013â€™s Golf Design Vision GTI concept. It would be a popular move with US customers who still value cylinder count and cubic capacity, but could be seen as a regressive step by bosses in Germany.

The third and most radical idea is to use the plug-in hybrid powertrain from the Golf GTE Sport concept. This combines a 295bhp 1.6 TSI engine derived from the Polo WRC rally car with two electric motors on the rear axle for a total of 395bhp and 670Nm of torque, and gave the concept 0-62mph in 4.3 seconds and 141mpg economy.

Whatever VW chooses, one thingâ€™s clear: a hot hatch power war is in full swing, and with its trio of GTIs, producing a minimum of 260bhp, plus a ballistic Golf R in the pipeline, the brand has all the firepower it needs to see off the competition.