VW Releases Pricing for the 2015 Golf R in USA 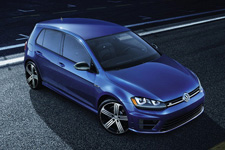 The base-level 2015 Golf R, which comes standard with Driving Mode Selection, a 5.8-inch touchscreen radio, LED reading lights, ambient lighting, an MDI with iPhone connectivity, keyless entry with push-button ignition, a rearview camera and automatic dual-zone climate control, starts out at $36,595 with the six-speed DSG transmission. For those who need some extra goodies, VW also offers the Golf with DCC active damping control and navigation for $39,090 with the DSG transmission. Volkswagen claims that the will hit dealers in first quarter of 2015, but it will be limited initially to only four-door versions of the aforementioned models. While there is no official confirmation, VW alludes to the fact that there will be additional U.S.-bound Golf Rs offered in the future, one of which we know will be with the six-speed manual transmission.

In case you missed its debut earlier this year, the 2015 VW Golf R is the most powerful Golf ever to roll out of Germany. It carries a new EA888, turbocharged, 2.0-liter four-cylinder that produces 292 horsepower and 280 pound-feet of twist. With the dual-clutch transmission, the Golf R can sprint to 60 mph in just 4.9 seconds, while the six-cog manual is slightly slower at 5.1 seconds. These lightning-fast acceleration times owe a lot of thanks to the Golf Râ€™s standard all-wheel-drive system.

In addition to being super fast, the 2015 Golf R is also fairly thrifty, as it delivers up to 30 mpg on the highway.Keep it locked here, and weâ€™ll bring you the full 2015 Golf R pricing details once VW releases them.