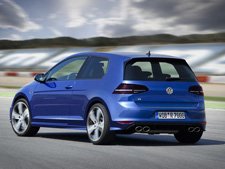 The R is making its public debut at the Frankfurt Motor Show next week. VW says it will go on sale in most markets late this year.

VW says the heart of the car is "a newly configured, 296- horsepower TSI engine," that's rated 280 lbs.-ft. of torque and should get 18% better fuel-economy. Those are German-market ratings, and the U.S. are expected to be a bit lower.

The current-generation U.S.-market Golf R is rated 256 hp, 243 pounds-feet of torque. Mileage ratings are 19 mpg in the city, 27 on the highway, 22 in combined city/highway driving. If VW's mpg forecast is right, the new R should have ratings of about 22/32/26 mpg.

A new version of VW's 4Motion all-wheel drive keeps the hefty amount of power from simply smoking the tires, as would be likely if it were front-drive only, as the basic Golf is. To distinguish the R from the Golf GTI, also a high-performance iteration of the Golf, the R has unique air intakes, different bumpers and side spats, four-pipe exhaust outlets.

If VW keeps its promise, The Golf R should be the last model that puts the U.S. last on the launch list. Staggered launches are a source of aggravation for U.S. dealers and buyers, who don't like waiting for something on sale elsewhere. VW says it needs to finish a factory in Puebla, Mexico, in order to better synchronize U.S. launches with those elsewhere.

Once Puebla's done -- early next year, VW says -- production of Golf models for North and South America will be shifted there from Germany, making them available more-or-less simultaneously in all markets. Puebla will start production with the seventh-generation Golf, sometimes called G7, unveiled at the Paris Motor Show a year ago. The new R will be based on that new Golf.

Golf is VW's best-selling car worldwide,. but its sales in the U.S. are down more than 20% this year and are a fraction of VW's Jetta and Passat sales.